Legislative updates on Alaska, Massachusetts, California, Vermont, and other states. 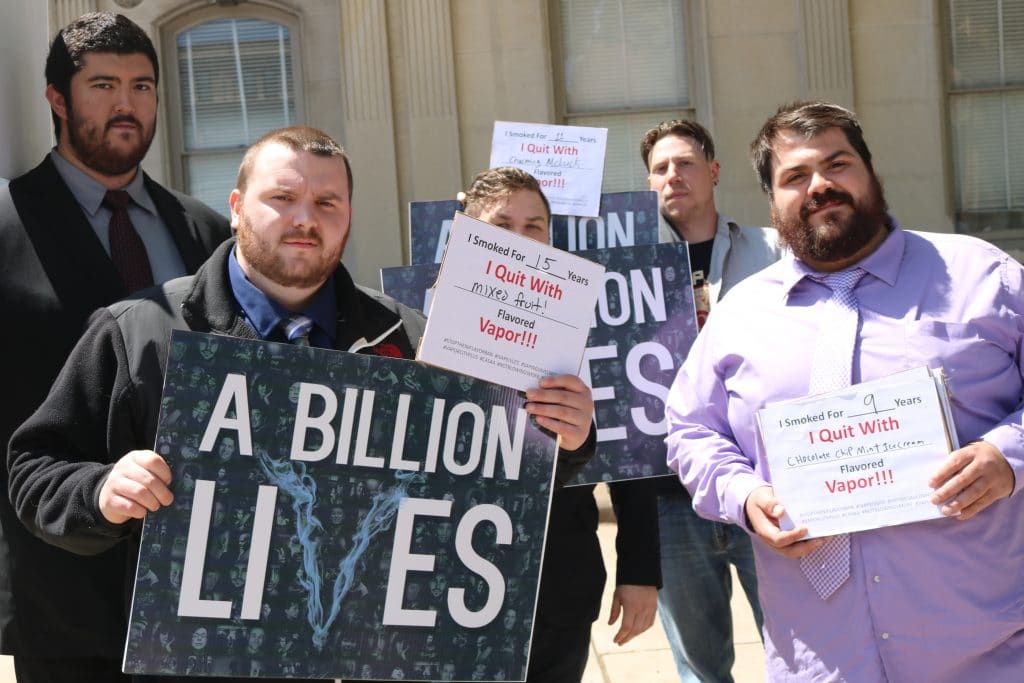 In the final hours of the Alaska Legislature’s 2018 session, two vaping-related bills passed; SB 63 (a bill that bans the sale of nicotine-free vapor products to minors) and SB 15 (a statewide smoking ban that includes vaping). Both bills await the signature of Gov. Bill Walker.

AVA President Gregory Conley, as well as Jeff Stier of the Consumer Choice Center and several members of Alaska’s vaping community, testified against SB 15 in committee. We are disappointed by its passage, as e-cigarettes had previously been removed from the bill, as we reported two weeks ago.  Unfortunately, as feared, the Senate approved an amendment to add vaping back to the bill.

Vaping will still be permitted in retail e-cigarette stores that derive at least 90% of their gross revenue from tobacco or vapor products so long as certain conditions are met (see page 3) or if the store has been open continuously since January 1, 2017. The original draft of the bill would have banned vaping in all retail stores unless the store was in a freestanding building, so the new language is an improvement.

On Wednesday, the Massachusetts House of Representatives overwhelmingly passed H4479 (now H4486), which will: (1) Raise the age to purchase tobacco and vaping products to 21; (2) Ban the sale of tobacco and vaping products in stores with pharmacies; (3) Ban vaping wherever smoking is banned; and (4) Require child-resistant packaging for all e-liquid products. It now heads to the Massachusetts Senate, where a similar bill passed by wide margins in 2016.

What we have seen in California, Minnesota, and Massachusetts is a good reminder of the accuracy of the phrase, “all politics is local.” In Massachusetts, the proponents of a statewide Tobacco / Vapor 21 law have been relentless in targeting local Boards of Health to pass the laws at the local level. At the present time, it is estimated that 70% of the state’s population already lives in city with a purchase age of 21. The number of local cities with vaping bans is likely similar or worse.

Massachusetts’ existing smoke-free law does provide an exemption for retail tobacco shops, so vape shops should be continue to operate without interference unless the local government passes an ordinance stricter than the state’s law.

UPDATE, 5/24/2018: Due to the threat of a veto from Gov. Phil Scott (who is opposed to tax hikes), the Vermont tax proposal did not become law. However, the impasse between the Legislature and Gov. Scott has caused a special session to be called. The 46% vapor product tax is now part of House Bill 2. CASAA is asking Vermont vapers to reach out to legislative leaders.

After years of attempts to tax vapor products at Vermont’s outrageous ‘other tobacco products’ tax rate of 92% of wholesale, the Vermont Legislature passed a 46% wholesale tax on all liquid-containing vapor products as part of its yearly revenue package. CASAA has released a Call to Action urging Gov. Phil Scott, who ran on an anti-tax platform, to veto the bill.

While 46% sounds better than 92%, we can assure you that Vermont politicians will not be satisfied with 46%. If this goes through, we predict that next year’s revenue package will attempt to bring that tax rate up to 92% or higher.

Here in Vermont in the tiniest state capital in America #ecigs #vaping pic.twitter.com/Ku0IjxBCWr

UPDATE, 5/15/2018: Minutes after this article was posted earlier today, Councilman Vincent Gray announced that he would be introducing an amendment to the 2019 Budget Support Act to raise the cigarette tax by $2 a pack (and, as described below, raise D.C.’s existing excise tax on vapor products). Hours later, the D.C. City Council voted to approve the amendment by a 10-2 vote, and then went on to pass the Budget Support Act. There are no indications that Mayor Muriel Bowser will veto the bill. Unfortunately, this means the D.C. vapor product tax will increase considerably in the future.

This cig tax hike will result in an automatic increase of the city's vapor product tax to probably over 90% of wholesale (including devices by DC's interpretation). Already one of the worst, anti-harm-reduction taxes in the country, and now arguably the worst. #ecigs #vaping https://t.co/dGcnU0W6Uj

As such, a proposal before the D.C. City Council to raise the city’s cigarette tax by $2.00 per pack (from $2.50 to $4.50) greatly concerns us, as enactment of this tax would trigger an automatic hike in the vapor products tax to over 90% of wholesale. At a hearing earlier this year before the city’s Finance and Revenue Committee, AVA, Americans for Tax Reform, the R Street Institute, and the Tax Foundation all noted the impact the new tax would have on the vapor product market in their testimony.

Having seen no progress on his standalone bill to raise the cigarette tax, Councilman Vincent Gray attempted to add the cigarette tax hike to the city’s budget bill earlier this month. AVA and the Smoke-Free Alternatives Trade Association submitted testimony in opposition to the tax. Fortunately, that attempt failed by a 3-2 vote, with committee chairman Jack Evans voting against the measure.

An extreme statewide smoking / vaping ban bill that would have even prohibited vaping in vape shops does not appear to be moving this year. Congrats to the Louisiana Vaping Association! Two bills either have been sent to the Governor or are expected to hit his desk soon; HB 56 (requiring all tobacco and vapor product sellers to display language regarding the Louisiana Quitline) and HB 239 (banning the sale of non-nicotine vapor products to minors).

A fun fact about HB 239 — due to sloppy drafting, an amendment that was previously put on the bill would have actually legalized the sale of nicotine-containing vapor products to minors. AVA was able to interject and help draft language that fixed this issue.

SB 2332, which would increase the age to purchase tobacco and vaping products to 21, passed the Senate by 35-20 on April 25th. Two bills in the House have yet to be brought up for a full vote. For more, see CASAA’s Call to Action and the Smoke Free Alternatives Coalition of Illinois.

This just in via an email from the California Department of Tax and Fee Administration — California’s tax on vapor products of 65.08% will change to 62.78% of wholesale effective July 1, 2018. You can view the rates here.

[1] In contrast, both California and Minnesota have higher wholesale taxes on paper, but their laws only apply to nicotine-containing products. Additionally, there are alternative calculations that can be used by in-state manufacturers that can make the tax less painful for retailers and consumers.