LONDON, ENGLAND — In a first of its kind long-term study published in the journal Nature, researchers have found no negative health impacts from the daily use of electronic cigarettes by young adult never-smokers.

Researchers from the University of Catania, led by Dr. Riccardo Polosa, tracked nine electronic cigarette users with no history of smoking, as well as twelve lifetime non-smokers and non-vapers, over the course of three and a half years. The researchers found no impact on a variety of health outcomes, including blood pressure, heart rate, lung function, exhaled breath nitric oxide, exhaled carbon monoxide, and CT scans of the lungs.

“In spite of previous health scares, our study shows for the first time no risk in long-term vapers who have never smoked in their life,” said Polosa, who presented the study at the fifth annual E-Cigarette Summit in the United Kingdom on Friday, November 17th.

Polosa notes that while even longer-term research is needed to rule out any possible negative impacts, changes in spirometry and CT scans can be seen in young smokers after approximately two years of cigarette usage. With the vapers, no signs of lung damage, including COPD, lipoid pneumonia, and popcorn lung, were found in CT scans, even among the study participants with the highest consumption of e-liquid. 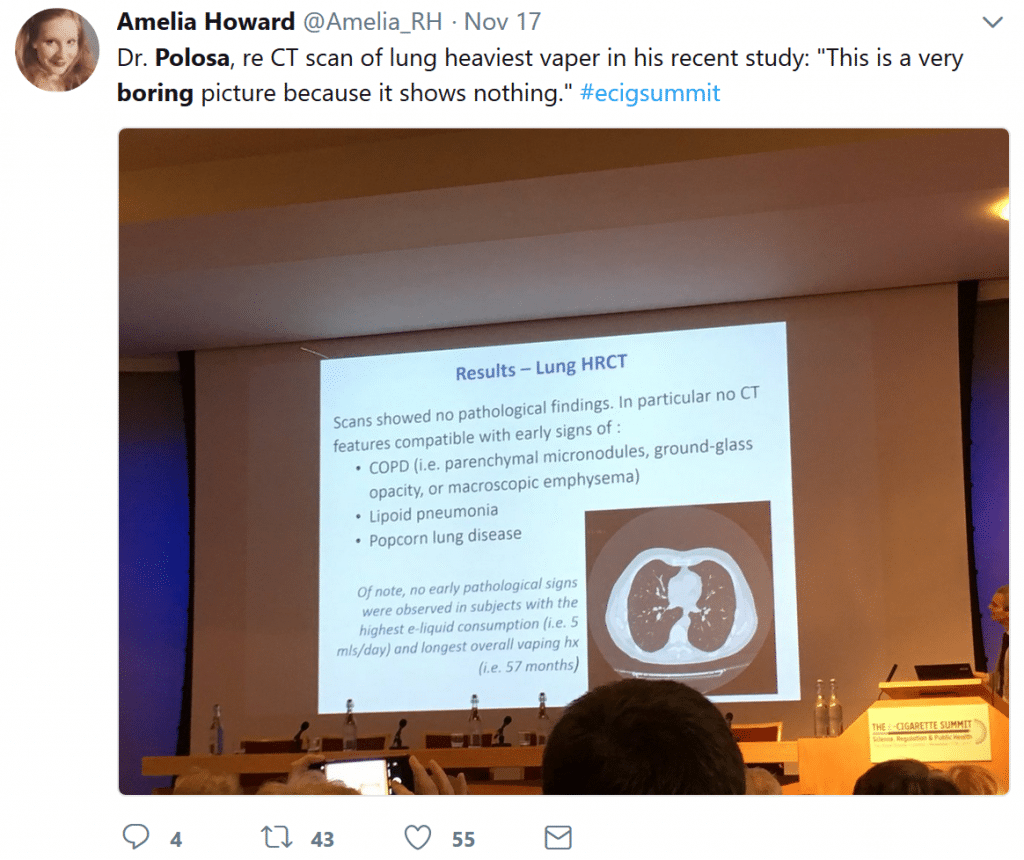 In the United States, far less than 1% of adult never-smokers are current vapers, with an even smaller proportion reporting vaping daily, according to the CDC’s 2015 National Health Interview Survey. Despite this, much of the concern in the media and scientific circles revolve around fears of the impact of vaping on nonsmokers.

“Mouse and cell studies may generate salacious headlines about the supposed dangers of vaping, but they are no replacement for studies on actual humans,” said Gregory Conley, President of the American Vaping Association, a nonprofit that advocates for truthful information about vapor products. “If no negative health impacts can be seen from daily vaping among those who previously did not smoke, how is it ethical to continue warning smokers away from using these products?”

In addition to this groundbreaking research, Polosa also recently published a review of the evidence on the impact of vapor products on COPD patients.